tuesday night we had the sister missionaries over for dinner. we had put the cat in the 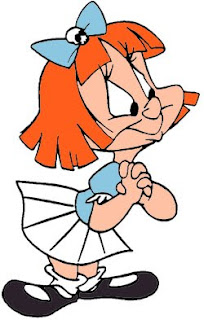 basement while we ate because he thinks he's a dog. he'll beg for food at the table but unlike a dog. he'll do that while he's on the table. anyhow we didn't want to deal with this, so to the basement. in the middle of dinner one of the presidents let the cat out, by accident i'm sure.
so that cat comes to the table and big sister grabs him and holds him in her very loving way that makes me glad i'm not a cat. she says she's just loving it, i tell her she's going to love him to death. she reminds me of Elmyra from the tiny toons.
so then she says "when i bite the cat he bites me back. when i hit the cat he bits me too."
of course little brother agrees that that is a true statement.

LOL. I remember being cruel to our cats when I was growing up. My favorite was spinning them around really fast and then watching them try to run away, but running into something instead. Maybe that's why Heavenly Father "blessed" me with an allergy to them.