Baby story (well to this point)

Wow what a day, we arrived at the hospital this morning around 10 am for our scheduled c-section. I was quite nervous but with the help of a priesthood blessing I was able to calm my nerves a little. The prep went well enough, my sweet nurse Emily told me how beautiful my veins are, which by the way does not translate well into great for putting in an IV.
I was wheeled into the OR at 12:33. Lovely spinal tap made me oh so grateful for my legs. A few minutes later the fun part began. Little mr. BabyP was breach. Which I kinda knew since he never really kicked my lungs, just head butted them a lot. They pulled him out a nurse brought him into my sight. The little stinker lived up to his name right then and there. He peed all over the OR. Hehehe! They took him to the next room for all that fun stuff nurses do. His weight 8lb2oz, length 22 inches. 10 fingers 10 toes or at least that's what they told me. And a great set of lungs which I heard loud and clear.
After they got him cleaned up my love brought him to see his mommy. We don't know if it was exhaustion or over flowing nerves but dad had to pass off BabyP quickly because he (dad) just about passed out. Once he got himself together dad he hurried to the nursery. And the doctors finished their work of sewing me back together. I was also told several times that my uterus was very large. How does one take that comment? I don't know.
When the doc was all finished the awesome nurses Emily & Jodi cleaned me up and wheeled me into recovery. While in recovery I learned that little BabyP was having a hard time adjusting so would not becoming to visit his mom but was instead headed to the NICU. I naturally was freaking out. Too many questions, not a lot of answers. I imagine they were trying to figure out what was going on. I was then wheeled to my room.
The doc came in to tell me what was going on, I of course was a mess by this point and cried the whole time the doc talked. What was wrong? Because of the c-section vs a regular birth the fluid in his lungs never got squeezed out. So he was having a hard time breathing efficiently. So they hooked him up to a machine like those used for people who suffer from sleep apnea. It's job to put needed pressure I the lungs by blowing air into them. We were hoping for a speedy stay in the NICU but it looks like he will be there for at least 48 hours.
This evening about 9:30 my fabulous nurse Amber wheeled me down to see Mr. BabyP. He of course is all covered in wires and whatnot but is making progress.
He is a very handsome little fella.

Now this mama is pretty tired but feeling many blessings.

So that's the story so far good times! 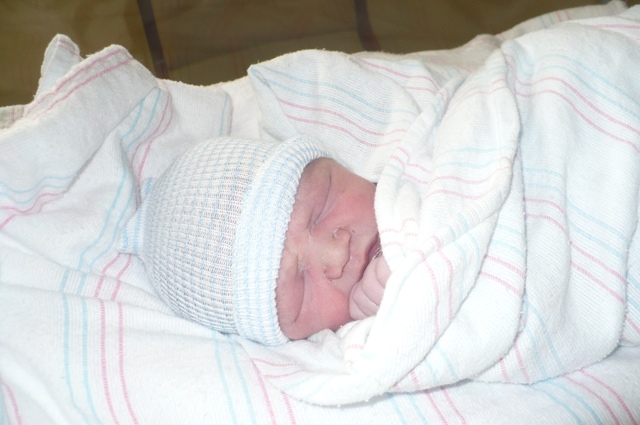